4950 Rupture and Intrapleural Migration of a Cohesive Silicone Gel Implant After Augmentation Mammoplasty: A Case Report

A 23-year-old female had received augmentation mammoplasty at a local clinic a week before visiting our hospital. When the patient's doctor performed a breast massage on the sixth postoperative day, the left breast became flattened. The doctor suspected a breast implant rupture and performed revision surgery. The implant, however, was not found in the submuscular pocket and no definite chest wall defect was found in the operative field. The doctor suspected implant migration into the pleural cavity, and after inserting a new breast implant, the doctor referred the patient to our hospital for further evaluation. The patient's vital signs were stable and she showed no specific symptoms except mild, intermittent pain in the left chest. A CT scan revealed the ruptured implant in the left pleural cavity and passive atelectasis.

The intrapleurally migrated ruptured implant was removed by video-assisted thoracic surgery (VATS). There were no adhesions but there was mild inflammation of the pleura. No definite laceration of the pleura was found. The patient was discharged on the first postoperative day without any complications.

Surgeons should aware that breast implants can rupture anytime and the injury to the chest wall, which may displace the breast implant into the pleural cavity, can happen during submuscular pocket dissection and implant insertion. 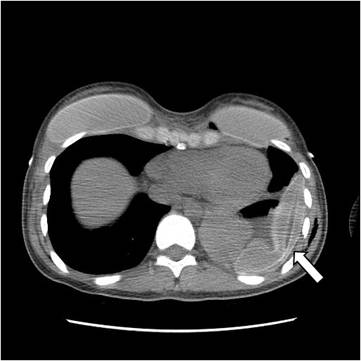 Fig. 1. A chest CT image of a 23-year-old female. The breast implants were located at the submuscular plane. The ruptured implant and passive atelectasis were noted at the left lower lobe area (arrow). 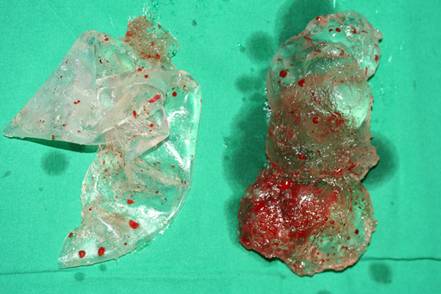